Banjaxeld… The Guiro and the Serpent kiss the Groove

Transcending the pains of daylight and dubious lucidity

A new year, new sessions, and eventually we’ll have a new album.  We were back at Matt’s place for another two days of recording.  This time the aim was to replace a bass line (re-record), redo / add bass & guitars to a slightly stretched  drum track, add / replace rhythm guitar to tracks, finish a couple of vocal parts, add a couple of harmonies, add some percussion bits, and get the guitar solos down. (…notice I didn’t end this statement with the word… ‘simples’…!)

Friday 10th January 2014… it kinda creeps up on you, then just when you think you’re safe it bludgeons you to within an inch of your tolerance… yep, another one of those early starts that acts like an unquenchable sponge for the magic coffee.  By the time we got to Matt’s Gary Frost had set up most of his equipment, the kitchen turned into a temporary mixing desk booth,  the living room adorned with cables, microphones, and the various instruments on Matt’s walls muted with wooden iced-lolly sticks to prevent any residual vibration and ring.  It only took about 10 minutes to set up the bass amp back in a separate room, and we were ready to go.

Being the last of a crop of weekdays, Friday I’m reliably informed is still classed as a working day, so we were without Jimmy and Vinny, and the general plan was to get all the stuff done that Sack, Jeff and Matt needed to do to leave the Saturday free for Vinny’s percussion, Jimmy’s solos, and some harmonies that needed to be added.

So, as planned first up was Sack who went in ‘cold’ to re-record the bass line on ‘Rolling Home’.  The original bass line was fine except for the intonation on the G string being out, causing the notes up the neck to sound sharp, now fully adjusted it was just a case of ‘lay it down again’.  On a ‘normal’ day, at a more ‘civilised’ time… well you know what’s coming…!  It wasn’t a top morning for poor old Sack, frustrated, a bit snappy, distracted by the thought of being distracted… to cut a painful story short… 2 hours and 20 parallel earth minutes later, with gritted teeth and not the slightest sense of satisfaction the job was finally done.  Even then Sack was still not happy with his playing, but conceded that it was finally acceptable enough to move on. 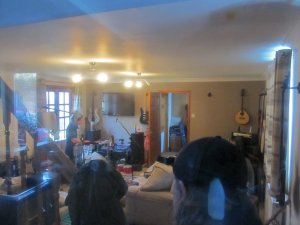 Thankfully, once again Emma French had dutifully popped in to provide the necessary refreshments, long breads and selection of healthy options to fill them with to keep the weary wheels of the recording session oiled and rolling on.

I kinda lost track of the order of things after that, but somewhere Jeff managed to do a couple of vocal repairs, a radio friendly version of ‘Kickback’ (…so that you can have a better chance of actually hearing it on your radio..!).  A simple operation involved the changing of a couple of ‘contentious’ words, that may, or may not… be construed, as potentially pertaining to certain perceived contentious subjects…!  Apparently any references to ‘marijuana’ and its ‘ilk’ are way too close to real life for the ‘reality culture’ hungry media broadcasting Big Brother Collective and their ‘ilk’…!

Matt also managed to get some guitar parts down, including a perfectionist’s pursuit of the perfect ‘Kickback’ solo.  Then with time running out fast, and the three of us needing to pack gear and go meet the others to do a gig, we decided to re-do the rhythm track for broken.  Working with the original drum track that had been slightly slowed down (lengthened), we basically did a live take, guitar, bass & guide vocal.  The first one didn’t work very well, too cluttered, too busy? After a couple of tweaks Sack changed the bass line, simplifying and hitting a new groove.  A couple of drop-ins and some funky confusion and damn, it seems to work real nice!

At the end of a full, intense day of recording what could be a better relaxation technique than packing up guitars, leads and amps to go off and do a Friday night gig, that’s being recorded live for Unsigned FM Radio…!  Must admit I was somewhat distracted by my own sore fingers and the prospect of shredding them some more, maybe even down to the bone, on another full on set.  You can read all about the evening’s entertainments on:

Saturday 11th January 2014.  As chance would have it we bumped into ‘Big Kev’, a percussive and very thirsty friend of ours at our gig at Unsigned FM Live the previous evening.  As a consequence of this meeting Vinny arrived for today’s session with a green canvas bag of percussive bits and pieces, including the infamous much sort after, especially for this recording, ‘guiro’, courtesy of, and even delivered by Big Kev.  That solved the first problem of the day, and freed us from our intended visit to the music store on the way to seek out the very same bounty.

Gary was already there to greet us, again.  Coffees were on mandatory prescription as Vinny busied himself setting various pieces of hardware up for his percussion session.  Its always interesting watching Vinny doing his percussion bits, you can tell he’s going through all the drum parts as well, always with full on concentration and total efficiency, except for getting to grips with the dreaded ‘guiro’, they can be tricky little blighters sometimes…! 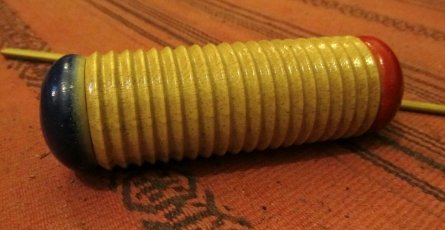 Saturday had been earmarked specifically for a day when Vinny and Jimmy could get their stuff done.  However, there were still some unfinished bits from the previous day to slot in hear and there, and the whole thing got quite intense very quickly.  Demands on time were such that Gary had to step in to mediate, motivate, and push the whole process along with a heightened awareness and a sense of urgency.

As a result three of us retreated to ‘the Lab’ for temporary solace and a chill session leaving Jimmy to get started on laying down his guitar parts.  After completing his guitar parts on a couple of tracks a production meeting was called to assess a way forward with guitar riff that just wasn’t sitting right.  After some consultation between Jeff, Matt, Sack & Gary… Jimmy was eventually persuaded to change his riff on ‘Rhythm of Life’ (Groove in B).  Just by simplifying it down to a three chord hook changed the whole dynamic of the song and just gives the groove something else!  It really was that dramatic a change for the better at the time.  You might even call it an ‘epiphany’ moment?  Personally I wouldn’t be so melodramatic about it, but it did transform the song. 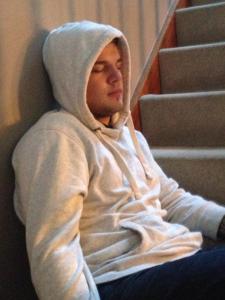 Jimmy continued gradually working his way through various solos and guitar parts, but struggled to get to grips with ‘For the Road’ in the time left, so Matt took himself off into the ‘Lab’ to try and work something out in the intense half hour or so before we’d need to go for it, whilst Jimmy carried on laying down other guitar parts.  Matt emerged with a nice harmony guitar part and even managed to structure most of the two solos.  However, we only had time for a couple of takes as Gary had already exceeded his scheduled time for the day, and we really were pushing the limit, time wise,  So then that was that…. and it was a wrap for these sessions, and probably just as well, fatigue and general tiredness had been creeping in, ears and minds starting to function erratically, the effects of two intense days beginning to show.  Bottom line is that we still have quite a few bits to do to get it how we want it, but I have to admit that it’s really starting to sound good now.

In the end we all had to just accept that the two days were a tad optimistic, if not unrealistic given the way things panned out.  We may even have put too much pressure on ourselves and created the tension and uncomfortably that we all admitted to feeling over these two days.  Lessons to be learned, especially learning about each other and the way this whole band / group thing works for us.  It’s an often misused term but this experience will make us stronger as a unit, and as individuals within that framework.  I don’t bother messing about with ideas such as ‘destiny’, or ‘fate’, or ‘belief’, but there is a very real sense of a bond growing between the five of us.  There have been a lot of changes since the three of us started this thing rolling; now the five of us are at last actually making the product that the hazy soup of Banjaxeld potential has been simmering.

More than just an album… it’s a banquet…! 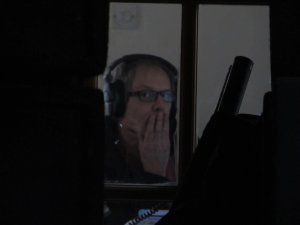 A big Banjaxeld thank you goes out to Gary Frost for his understanding and patience, and especially for supporting this project through beyond the original estimation.  The plan now is to take a few weeks away from the recording process, assess and prepare, rehearse and refine.  During this process several tracks have changed, and several we’ve changed how we do them, a bit of deconstruction, the odd inspirational moment…. basically there are harmonies still to complete, a couple of guitar parts, a couple of percussion pieces found to heave been missed out, possibly some singing bowls, possibly a little mandocello, and then its just mixing really!

it really has been and is an organic process, but it has to have a resolution moment.  It’s so frustrating that completion is so close and yet what it needs more than anything else is ‘patience’…!  But we’re keeping to the initial premise and plan for this album, to promote Banjaxeld’s sound as it is, showcasing the various talents within the band, and doing what we do.  This album will be Banjaxeld at its current peak, uncompromising, transcending genres, and forging our own sound.  Its all down to fitting in people’s individual schedules now, but one way or another we will soon have this beauty nailed.

Allow me to ‘draw’ your attention to a ‘Cover art’ update…

I held back posting this for a couple of days because we’ve just had a meeting with Illustrator Shaun Speight who’s doing all the artwork for the album.  I don’t thus far have any samples to show you, as things haven’t progressed that far yet materially.  We did have a very interesting ideas session (and some very tasty food, thanks Shaun), and mooted the theme based on some of Shaun’s amazing ‘Comic book’ style illustrations (sorry, my description doesn’t do it justice…!).  Of course we’re having to consider the whole printing / packaging costs thing, so we’ll likely slim down our original idea of having a booklet and settle for a single folding leaf cover, with a back cover on the CD case.  We did also continue the theme through ideas for T-shirts, Hoodies, oven gloves and other goodies, but that’s pretty much the gist of it so far, any more than that would probably take up another whole blog…!  Anyway I hope to have some preview samples for the next blog in this tail.